A runner who can’t run is simply no fun…

I have been a runner for over a decade. In all those years, I have never been unable to run due to injury. I have taken breaks to have my children and I have had periods where I lost my mojo and just didn’t feel like it. This is the first time I have been told not to run.

Ironically, in the months leading up to this injury I have achieved more than I ever thought possible as a runner. I ran new PBs across 5K, 10K, 10-mile and Half Marathon distances.  I was working with my PT to gradually improve my running posture and had started to see results. In the last year, I had gone from being a 12-minute miler to an 8-minute miler. I had completed a sub 2-hour half marathon (1.50 at Leeds Half) and was all set to achieve my first sub-50-minute 10K. I took part in my first off-road half-marathon and had even braved one of the club relays. I was planning to run the Leeds Country Way in September and was hoping for a sub 1.50 half marathon time at Vale of York HM. My PT was encouraging me to aim for a sub 4-hour marathon next. As well as meeting my own goals, I was also proud to assist with leadership of the club’s Absolute Beginners group and support others embarking on their own running journeys. It was all going so well….

I first noticed the pain across the top of my right foot on 10th July during Leeds 10K. At the time, I assumed it was simply because I was wearing a new pair of shoes and I might have laced them a bit tight. The pain in my foot continued to niggle in the weeks that followed. In true ‘sticking my head in the sand’ fashion I carried on with my normal training routine and hoped the issue would resolve itself. It didn’t. 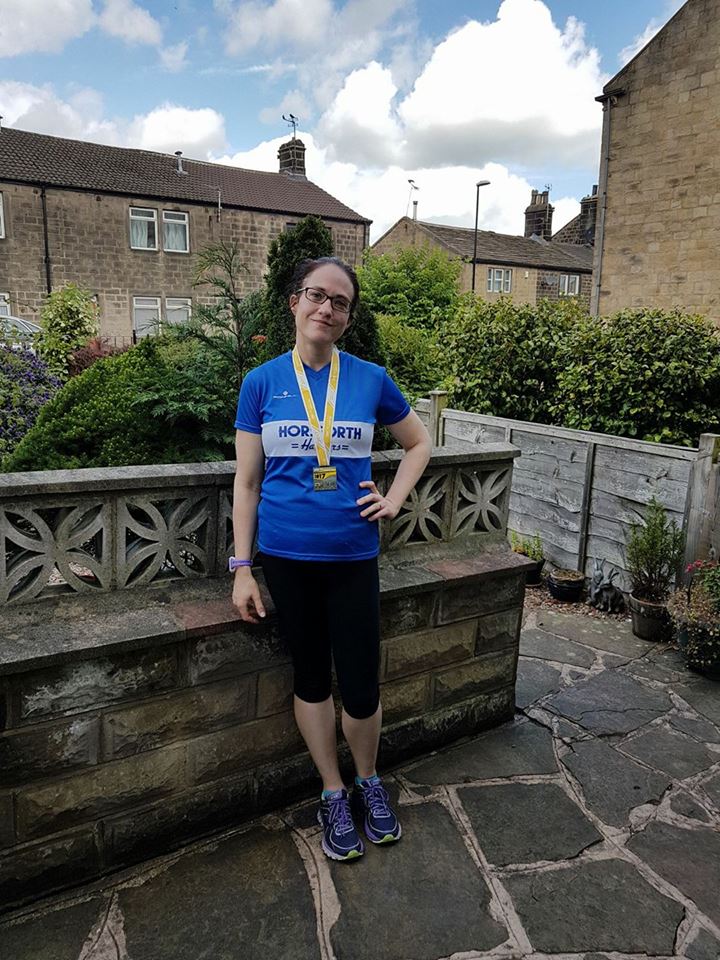 All smiles after the Leeds 10K…

I eventually mentioned the pain to my personal trainer as I was doing the Northumberland Coastal Run on 23rd July and hoped for a quick remedy. He suspected Extensor Tendonitis. This is inflammation or irritation of the tendons across the top of the foot, usually due to overuse. He advised that I needed to stretch out my toes to improve flexibility and reduce pain. It all seemed simple enough. The exercises relieved the pain and I went ahead with the race as planned. Torrential rain and mud made for very tough running conditions at this year’s NCR. I could feel the pain in my foot as soon as I set off, it progressively got worse and I remember it became excruciating beyond the 10-mile point. Still in denial about the severity of my injury, I pushed on as normal for another couple of weeks after that.

Pleased to finish the Northumberland Coastal Run in one piece… just.

The last run I did at the club was on 1st August. My foot was painful throughout and persisted in the days that followed. I was due to take part in York 10K on Sunday 6th August and I was worried because the pain in my foot was getting worse and had started to radiate up the whole leg. I realised I could no longer ignore it. My PT advised me against doing the York 10K and to stop running until the pain had resolved. It suddenly occurred to me that this wasn’t going to just go away and ignoring it for weeks and carrying on with training and racing had most likely made things worse.

My last few weeks have been spent doing endless rehab exercises. My current best friends are a foam roller, a broom handle, a cricket ball and a tin of beans (I’ll leave you to ponder that).

My PT identified that my ankle mobility is poor and that I have overly tightened peroneus muscles. The flexibility in the toes on my right foot is non-existent. My knees and ankles roll inwards, placing too much stress on the Achilles, so I can now add Achilles Tendonitis to my original diagnosis of Extensor Tendonitis. I had been running on feet that couldn’t take the massive impact I was placing on them. In the previous few months I had switched to increasingly running on the forefoot, which had also exacerbated the problem. With this type of injury, unfortunately you can’t see the healing process. There is no clear indication of how long it will take to recover. A recent X-Ray of my right foot was clear, so thankfully no sign of a stress fracture.

Running is an all-consuming beast. Until you are forced to stop you don’t realise just how much it defines you as an individual. You’re not sure how it happened but it has become the thing that keeps you afloat. For many of us, running is like a trusted old friend. It keeps us healthy and protects our sanity. It is our ‘me time’, our self-esteem boost, the foundation of our social network and a reason to feel proud at the end of the day. All our time away from home revolves around running and we come to rely on the support and advice from fellow runners. When all this is suddenly taken away we are left feeling bereft and with an acute sense of grief.

A runner who can’t run is no fun. I am a horrible person to be around. My family and friends are often afraid to mention the ‘R’ word for fear of getting their heads bitten off. Some days I don’t speak, I simply growl. There is a lot of displaced anger. It’s hard not to take your frustration out on those closest to you. 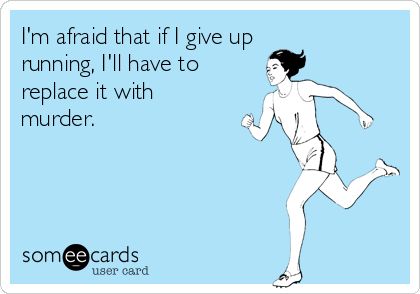 It’s a challenge to maintain fitness when you can’t run. Nothing gives you the same buzz as running. You miss the endorphin fix. You suddenly have a heightened awareness of everyone running. Every street corner you turn, there is a runner innocently waiting to rub your nose in it. Scrolling through Facebook is a minefield of reminders of what you are missing. Photos of smiling runners posing at races you should have been taking part in, Strava routes, new PBs, race updates, posts from all the running-related pages you follow… the list is endless. Being an injured runner is fraught with frustration and loneliness. Not being able to get out and run increases that feeling of isolation from the running community. There is a real sense of injustice and that your body has betrayed you. You suspect a conspiracy between fate and the universe. Basically, it appears that every Tom, Dick and Harry can run… except you.

I bumped into a runner from our beginners group the other day and asked how her running was going. She told me she has moved up to the improvers group. It occurred to me then that other people’s running journeys are going on even as mine has ground to an unscheduled halt. I was once again reminded of how isolating it is to be an injured runner. I love running. I miss running. Some days it feels like a physical ache (and not just in my foot).

So, what I have learned from this experience? The biggest lesson is don’t ignore persistent pain. Listen to your body and address niggles before they become full blown injuries. As runners, we want injuries to heal quickly, but unfortunately that doesn’t always happen. We play a game of injury roulette, limping through training sessions and hoping for the best. We often have a high pain tolerance and only seek treatment when the problem becomes severe. Maybe if I had listened to my body sooner, I wouldn’t be facing the torture of this prolonged lay-off.

I also realise that I won’t be able to just pick up where I left off, blithely returning to training with reckless abandon. Instead, I’ll have to take things slowly and have some patience, which is often a dirty word for runners. We are impatient creatures by our very nature. Allowing the body time to heal is hard, but I’m learning that patience is going to be one of the most important components of getting back to running.

I am trying to stay positive. Although anyone who knows me will tell you I am a ‘Negative Nancy’ at the best of times. Apparently, the remedy for a depressed injured runner is to stay connected and involved with running. The consensus seems to be that it’s good to give something back to the gods of running by getting involved in other ways. I am planning on marshalling at the Horsforth Vets Race on 1st October. I am keeping up with updating race results on the Horsforth Harriers club website and I am writing this blog in the hope it will be therapeutic. You might even see me volunteering at a parkrun or two…

As a runner, being injured at some point is inevitable. How we survive it is a choice we make. It’s important to stay focused and think positively. Set some rehab goals so you can celebrate the small victories and recognise progress along the way. See the bigger picture. Don’t let despair creep in. I must keep believing that I will be back out there soon. As a good friend of mine recently said: “you’ll be back, we all will. And we’ll keep coming back, whatever, because the alternative is too crappy to contemplate”.

Meanwhile, I am looking forward to the final stage of ‘Injured Runner Grief’ – ACCEPTANCE. This is when you are sticking with your rehab plan and you’re finally seeing results. You have accepted the injury, as well as the fact you will eventually get back on your feet.