I joined in 2015 after being persuaded by Vicky Miller that I should come along.  I was nervous that I wouldn’t be fast enough but Vicky made sure didn’t back out by giving me a lift!  I’d already done a couple of 10ks and parkruns so I joined the equivalent of Helen’s group.  The first time we did more than 10k I was gobsmacked that I’d managed to run so far.  I think sometimes we forget how far we’ve come, I’m still not the fastest but definitely less afraid of the distance now but it sometimes gets normalised by being in a club and seeing people doing amazing things like marathons and ultras.  Sometimes we should stop and remember how far we’ve come (both literally and metaphorically).

I’ve moved around a bit recently running with Helen’s group at the start of last year and more recently running with Jacqi and on a couple of occasions Pete.  I love the fact that the groups give you an opportunity to talk to people you might not bump into in ‘real life’. I’ve learned loads from how to ferment vinegar (thanks Joe), to local history (Mr Charles) to some rather rude words (erm, thanks Speeds & Smedley).

As Phil mentioned in his Meet the Harrier we also frequently put in social runs outside of club in our little #crew and Nicola Barnett has more than once had the job of being my chief therapist over 12 miles of psychoanalysis! Running has definitely opened up a support network that I wouldn’t have had otherwise.  It’s not just that either it gives me space to reflect, provides a useful distraction and gives me a sense of achievement from meeting (sometimes arbitrary) goals.  Don’t know where I’d be without it. 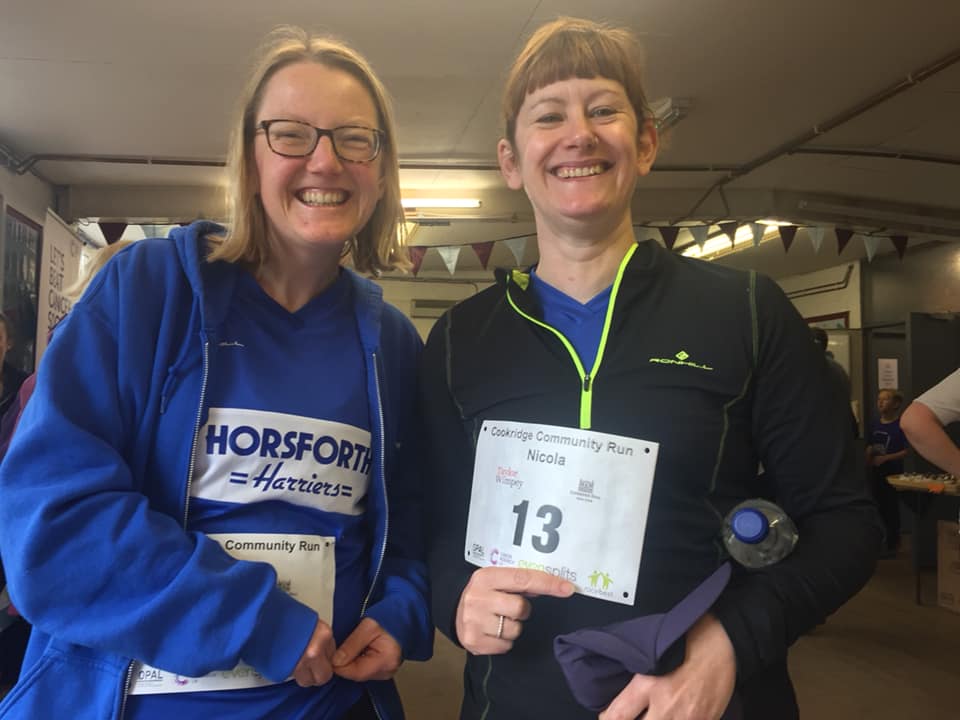 And talking of arbitrary goals, the other group I run with is the Harriers parkrun group.  I love obsessing about the ridiculous parkrun challenges and was very excited complete all the Yorkshire and Humberside parkruns (until they took away all the region data and I no longer got a badge!).  I’d definitely recommend getting involved if you haven’t done so already, you don’t have to be quite so obsessive about it as the chief club parkrunners (Steve, Tommy…) but once you start you just might be surprised at how addictive it all is.  What I love most about it is that it starts conversations between people at club who run in different groups…but having said that I do love all the stats too.  It was great when I wasn’t having a good year pace wise as it gave me other things to aim for (getting to 100, ticking off new parkruns etc.) which kept up my sense of achievement and kept me going. 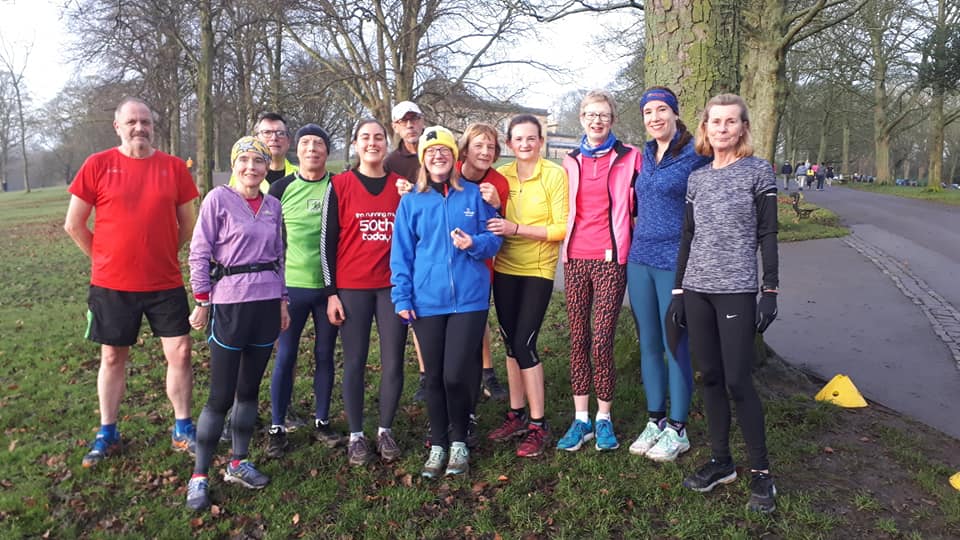 With fellow Harriers at parkrun

Still trying to work out my goals for 2020, I had a great year PB wise in 2019 which is lovely but does cause more problems for what to do next.

My first goal was to get to 25 parkrun volunteers, which I’ve literally just completed this morning, and I do plan to do more volunteering this year.  I particularly want to get better at pacing at Bramley after having my first go last week and still having room for improvement! 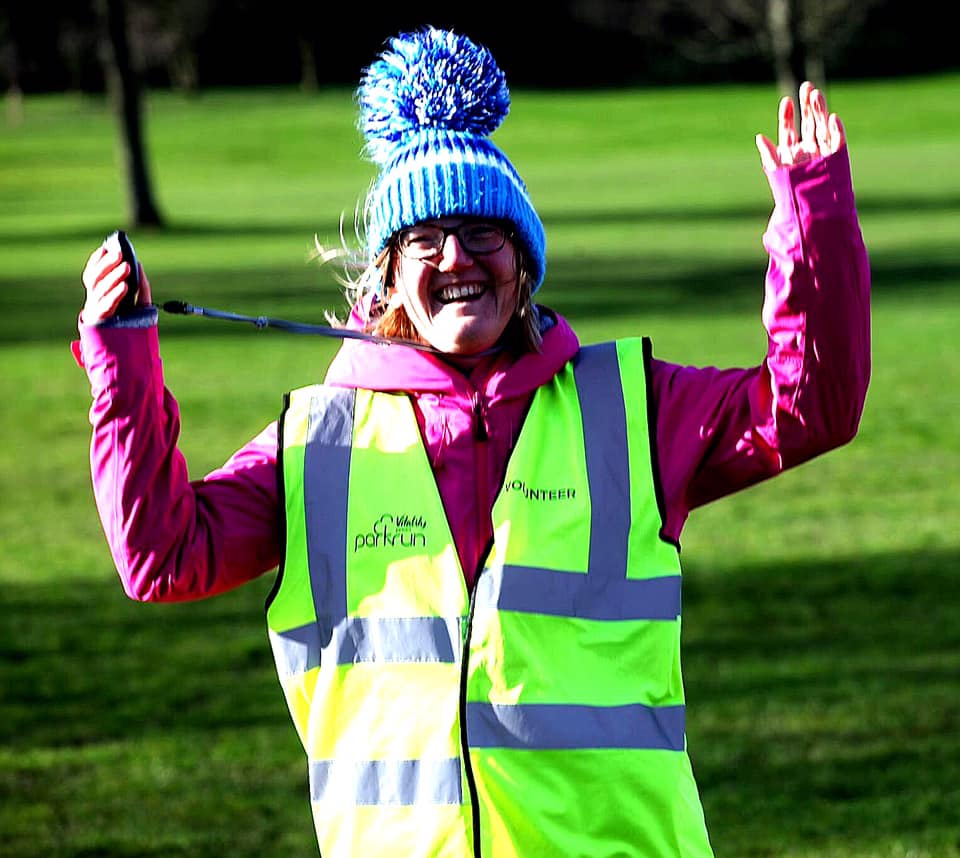 Secondly is to improve at 10 miles, given my current PB was at Guy Fawkes – feels like I’ve got a faster one in me somewhere.  I really like 10 miles as there’s not quite the pressure to be fast as with a 10k and the training runs are easier to fit in than a half.  I’ve entered Snake Lane and Eccup so I’ll see how they go. 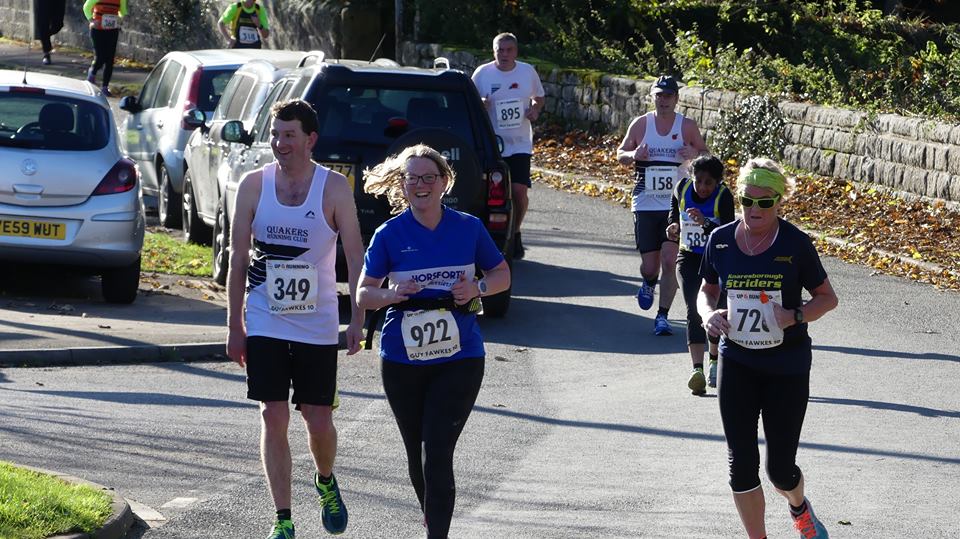 This is such a tough question, not sure I can answer, none of my times are in any way astounding, yet all of them felt a big attainment.  I’m not keen on the word proud, isn’t it one of the seven deadly sins?!? I started running before I had my kids (pre Harriers) and then had a big gap before coming back to it, some of my biggest sense of achievements have been since, firstly when I managed to get back under 1 hour for a 10k and then when I was able to stop talking about PBPBs (post baby PBs!) and they became overall PBs again.

I’ve had a good year in 2019 and managed to set PBs at 5k, 10k, 10 miles and Half Marathon as well as knocking 20 mins off my Northumberland Coastal time, so I am quite chuffed with that.  I’ve had a lot of help from the club and others on the way, with Steve Allen pacing me to my 5k and the #crew guys and Debs helping me with the Half Marathon training and motivation.  Thanks guys!  I’d definitely encourage club members to put a call out for a pacer if you’ve got a particular goal in mind, I’ve found people are always happy to help and it can really make a difference. 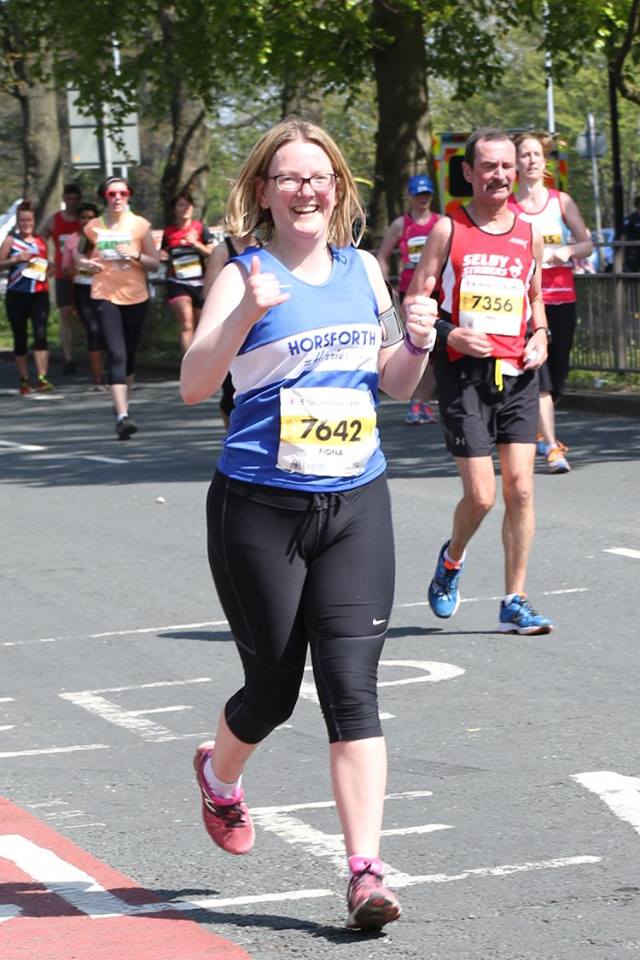 Like many people I originally started running for a Race For Life back in about 2003 or something. I then sporadically ran (never more than 5k) until I decided to do the Dewsbury 10k back in 2007.  Back in the days of paper entries and non-technically T-Shirts.  I did a couple of other 10ks, never ran further than that and then had kids and packed it in for a good few years.  I now look at runners carrying on with their running whilst pregnant with complete admiration, wish I’d done the same.

I still really like the Dewsbury 10k and this year will be my 7th attempt I think.  It’s not very scenic (well, not unless you class Legends, Frontiers and Tesco Extra as landmarks) but I like the fact it’s slightly more inclined on the way out, so great for negative splits and it’s not as busy as something like the Abbey Dash.  And also if you have a bad run you’ve still got the rest of the year to make up for it. 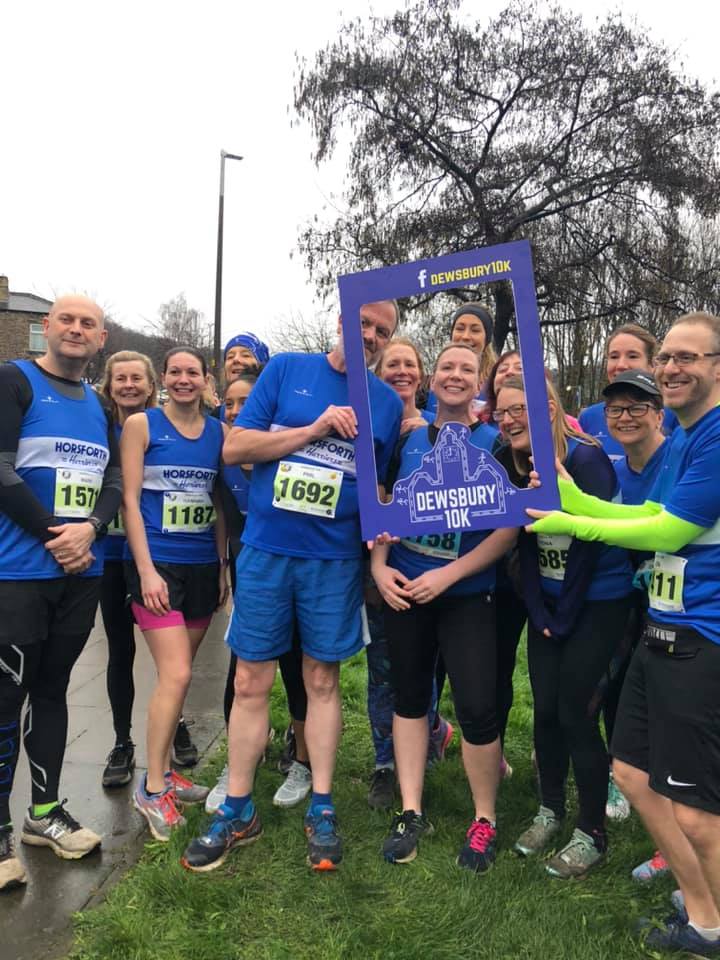 At Dewsbury 10K with fellow Harriers

My favourite has got to be the Northumberland Coastal run.  Unlike any other run I’ve done, the views are amazing, the atmosphere is something else and I’d never have thought I’d be able to run it.  It’s also a race where it’s quite nice to be towards the back of the field as you can see everyone winding out in front of you across the beach towards Dunstanburgh Castle which is such an awesome sight.  Running point to point is great, although it did mean that on the first year I did it we were running into a massive headwind all the way (hence the big time improvement last year).  I love the camaraderie of staying up in Alnmouth with club mates and last year Lisa even came up despite being unable to run to give us chocolate milk and inspiration.  It was unbelievably helpful to have a friendly face shouting motivation as I dragged myself across the last beach. 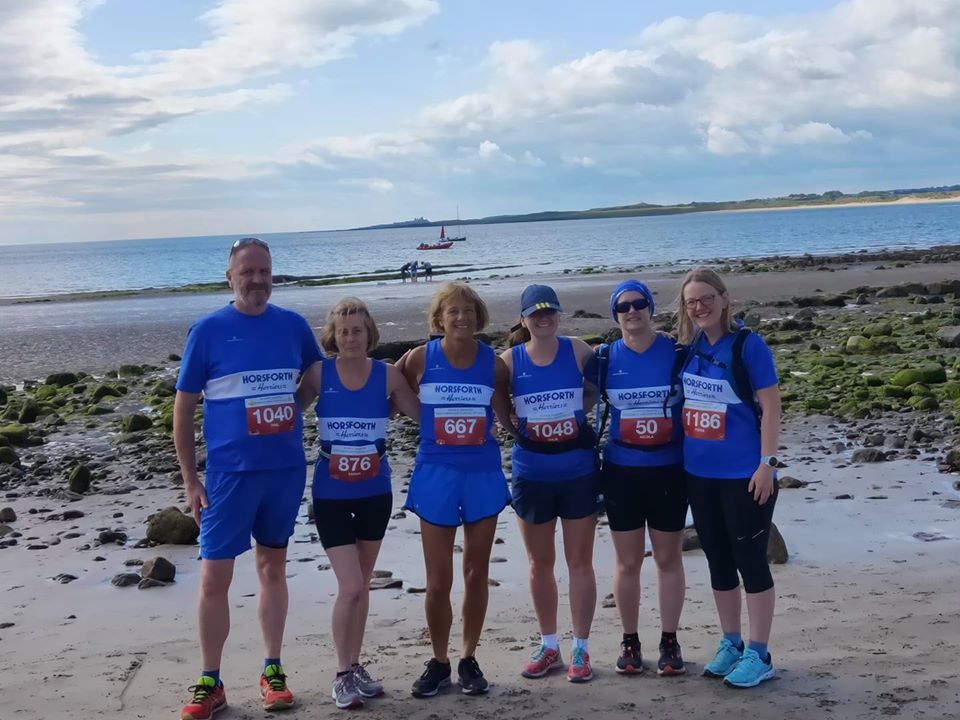 Getting ready for Northumberland Coastal Run 2019

Probably the sight of the first runner coming in to view at the finish line of the ABC last year.  It was my first year as Volunteer Coordinator with Phil Smedley and Libby Clark and you have no idea how worried I was that I might have screwed it up!  I needn’t have worried though, we have such a good team on the course keeping control of everything that all was well.  It was a really great feeling when the first runner came through and again when Julie Smith and Gini Knight appeared as tail runners!

Seriously though, being on the ABC committee has been another good way of getting to know people in the club and I would encourage people to get involved (in either the committee or on the day) if they can.  There are loads of jobs to do, no previous experience is necessary and we need over 100 volunteers on the day (I realise that sounds ridiculous but it’s true) so we really do need your help.  It’s a really great feeling when the runners comment on the great support after the race.

“I run to seek a void” which I was directed to in the Oatmeal book “The terrible and wonderful reasons why I run long distances” by a friend, although it is actually a paraphrase from Haruki Murakami.  Either way it’s true, when I run it often clears my mind of everything and that’s really useful, especially when you’re of an analytical disposition like me.  It’s been especially helpful the last couple of years in allowing me to have time out from my Dad’s illness and the subsequent grief.

Familiar with most of the parks of Yorkshire and their facilities! 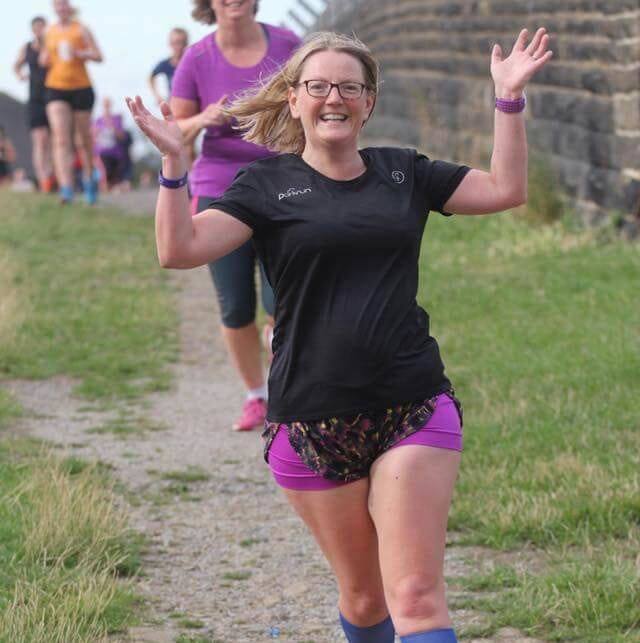