Get your tickets for the club social event of the year! On Friday 18th January 2019 the club will be holding its annual awards presentation night to recognise the achievements of our runners during 2018. This is a great opportunity to socialise with your fellow club members. This year’s venue is Yarnbury Rugby Club. There will be food, disco and a bar. The event is open to all club members and guests are also welcome. The tickets are just £5 for both members and guests. Buy your tickets from your group leaders or Carol Harvey on Tuesday nights. Don’t miss out!

On Friday 9th February 2018 the club will be holding its annual awards presentation night to recognise the achievements of our club runners during 2017. The event is also the biggest social event of the year for the club, a great opportunity to socialise with many of your fellow club members old and new.

The venue is once again Horsforth Golf Club, Layton Rise, Horsforth, LS18 5EX. Doors open at 7.00pm with the awards presentation starting at 7.30pm prompt. There will be a live band, disco and late bar (please note: no food is being served this year). The event is open to all club members and guests are also welcome.

The tickets cost £5 per head for both members and guests. Tickets are available from your training group leaders. Tuesday night either before or after training is a good time to get your tickets.

Payments can be made by bank transfer to the club bank account, cash or cheque (payable to Horsforth Harriers). Should you make payment by bank transfer please include in the reference your name and the word ”awards”.

The committee hopes you will be able to join us for what should be a great night!

Join us on Monday 11th December at 7.30pm for our annual ‘Christmas Lights’ club run with our friends from Kirkstall Harriers. We run into the City and around the Christmas lights before returning to the LPSA for buffet food and a chat. If you intend on coming don’t forget this year it takes place on a MONDAY!!

The address is Leeds Postal Association (LPSA), 4 Beecroft Street, Leeds, LS5 3AS. Turn first left up Beecroft Street and then left into the shared entrance with Harvard Mills. Keep to the left and use the car park by the club room.

Runners of all abilities are welcome. Janette Freeman needs to know numbers asap so that catering can be ordered. Please advise her if you intend to come and also any special dietary requirements.

If you have any questions or you cannot access the HH Facebook Page which is the medium that we are using to collect numbers for the buffet then please email Janette at freeos@totalise.co.uk.

Also for those who can’t make it the club will be open as usual on Tuesday 12th December.

We look forward to seeing you all there with bells on! Ho ho ho…..

The Harriers are planning a day off from racing around the streets, trails and fells of Yorkshire and are instead heading off for a fantastic day at the races to watch the Equine Athletes try and achieve a PB or two.

*** Contact Phil Jones e: Horsforthrhino@gmail.com or 07808 911619 today to secure your place for what should be a fun and enjoyable Harriers social day out ***

A great time was had by all at the annual club presentation night held at Horsforth Golf Club. We were treated to an opening YMCA dance by some of the club’s finer specimens, as well as a half-naked ‘name that athlete’ competition which is a sight that will be forever tattooed on our collective subconscious.

Thanks to Bob Foulkes, Liz Huby and the club committee for making the night a huge success. Congratulations to all the prize winners (details below). The Club Championship format implemented by Tony Hazell now means there are even more opportunities for runners of all abilities to shine. Congratulations to Tony for his receipt of the Marc Springer award for outstanding contribution to the club. This is for his work on the Championship and also managing the Apperley Bridge Canter.

Thanks must also go to Andrew Charles (aka ‘The Supreme Athlete’) for his usual witty job as compère for the evening, as well as our Club Captains Bev Elliott and Alan Squire who presented the awards. 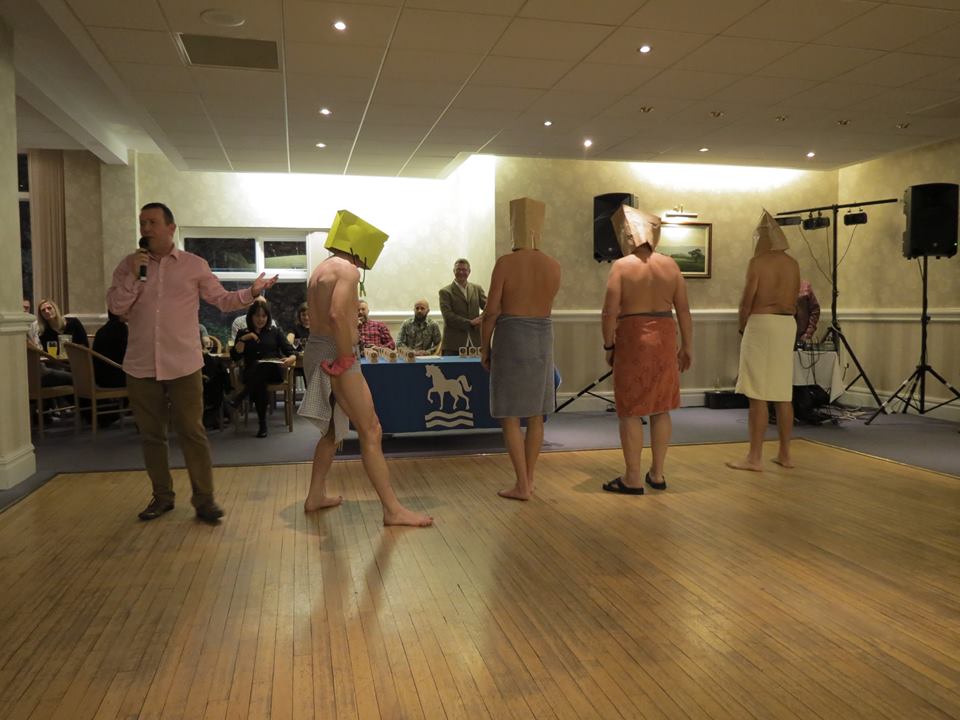 The infamous ‘name that athlete’ competition 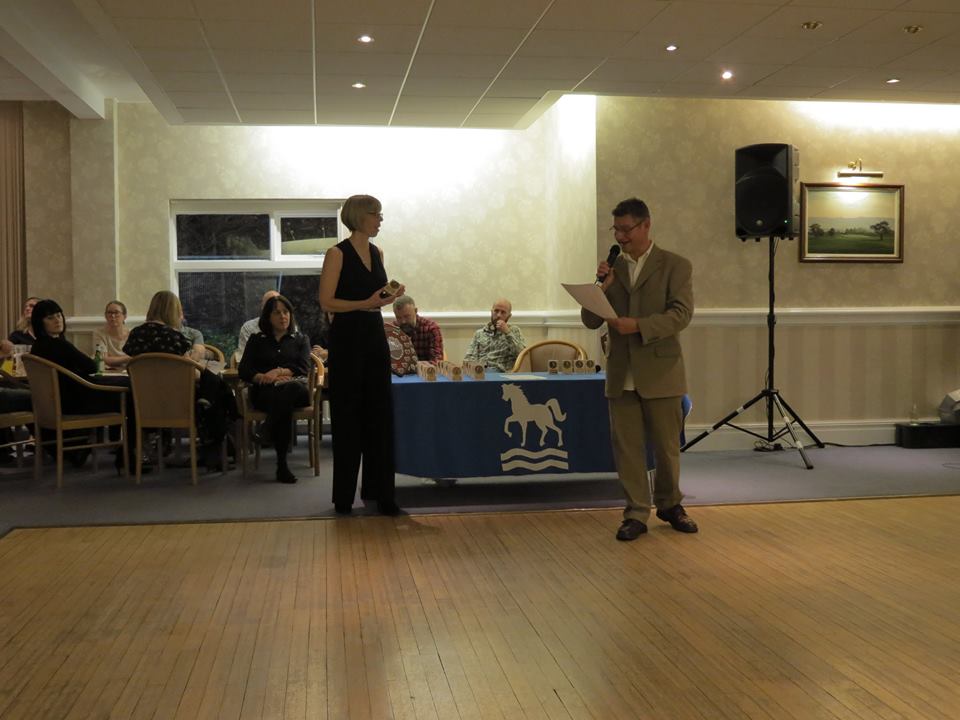 Club Captains taking the mic at the 2016 presentation night 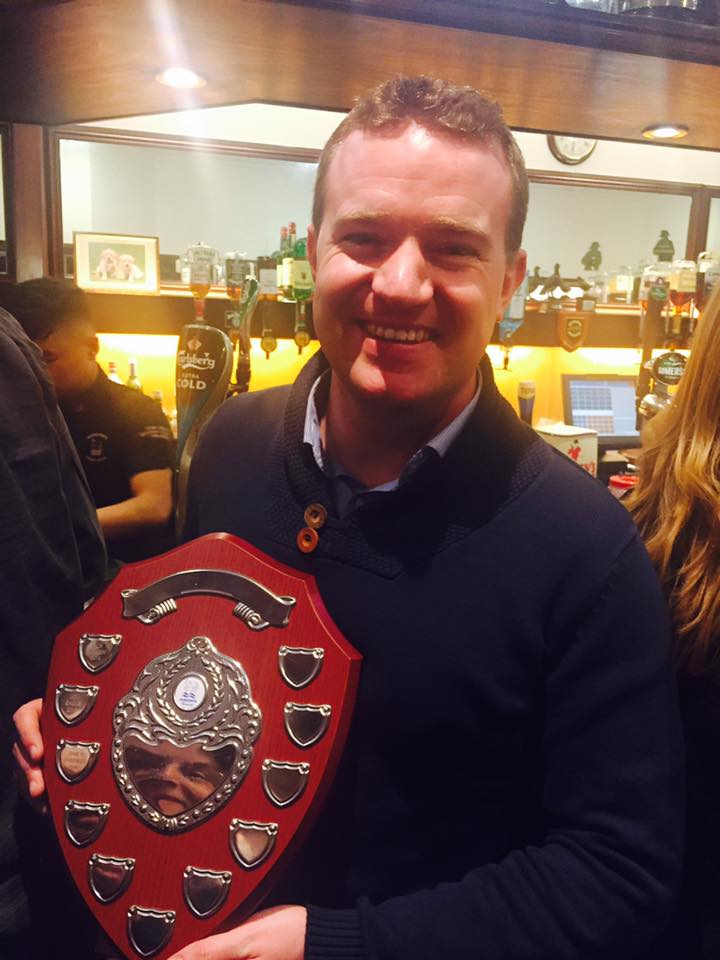 *Thanks to Melanie Coates for the photos

Our annual Christmas run will be held this year on Tuesday 27th December (Bank Holiday). The club will be open from 10am for a 10.30am start. Routes will be organised as usual to suit different abilities but some group leaders may not be available. The route usually follows the Horsforth boundary so it could get muddy!! After the run, pie and peas will be served and the bar will be open until 2pm. If you want food please let Liz Huby know asap (including  any special dietary requirements) so we can order the pies. Liz can be contacted via Facebook or email.

Please note: There will be no evening club run on Tuesday 27th December.