FAT BLOKE BLOGS – UP WITH THE LARK, DOWN WITH THE TITANIC AND ON TOUR WITH THE BBC

Home/FAT BLOKE BLOGS – UP WITH THE LARK, DOWN WITH THE TITANIC AND ON TOUR WITH THE BBC

I’m a terrible parkrunner. One a year on average over the last eleven years. I am however, quite interested in parkrun tourism. Not the getting up at stupid o’clock to drive somewhere local-ish, kind, more your flying somewhere for a weekend jolly up on the proviso you haul your sorry, and potentially hung over, carcass out of bed on Saturday morning to do the local parkrun.

And being easily persuaded, I found myself joining Julia Day’s merry band en route to Belfast to do ‘Q is for Queens’ in pursuit of Julia’s parkrun alphabeteer project. I’d never been to Belfast before, save a transfer at the City Airport, so it was a good chance to explore somewhere new. The night before the run was in the historic Crown Liquor Saloon, opposite what is claimed to be ‘Europe’s Most Bombed Hotel’, which went fairly well given nobody was rendered hors de combat either by bombing, or alcohol consumption (Guinness – when in Rome and all that…) for the following morning’s 5K outing at Queens University. 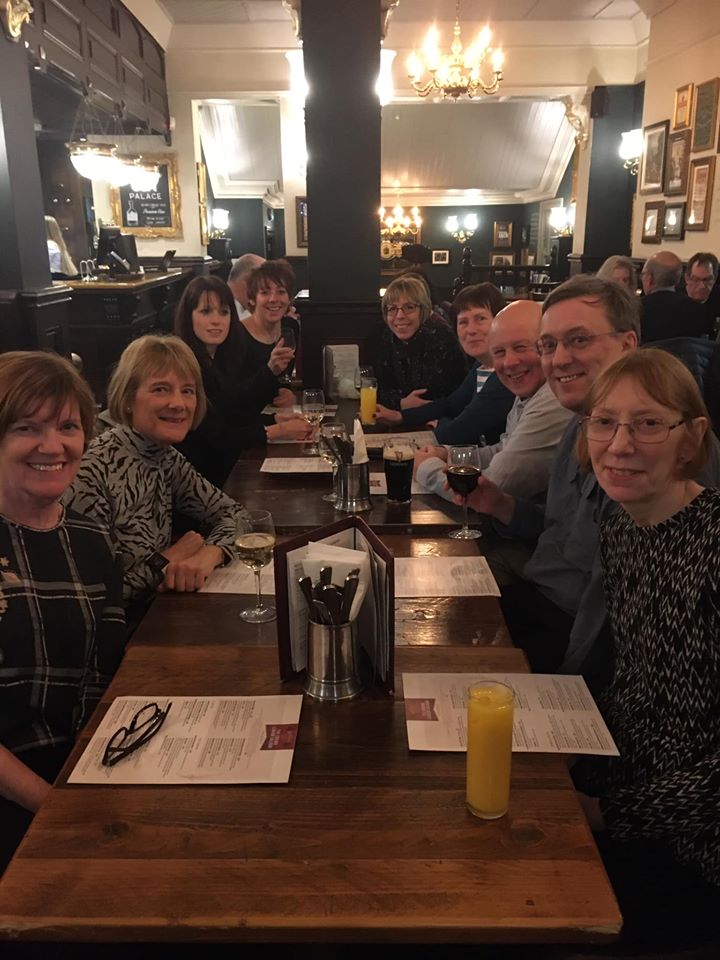 The run itself was very civilised and the Belfast parkrunners hugely welcoming to us tourists (there was also a couple from Nottingham as well) and there was tea, coffee and a ton of cake available in the University sports facility afterwards. The course was fairly flat, but twisty and turn-y around the sports fields, with a musical, twice passed, checkpoint – requests for your favourite running inspirational tune accepted I believe – which legislated against fast times. I believe I ran what can be referred to as an ‘adequate’ time. Lindsey Clegg, purist to the last, ran to the venue and back and claimed 1st lady home. (The rest of us opted for taxis as our warm up and down). I was only mildly disgruntled to be accused of ‘jogging’ (the ‘J’ word!) by Lindsey as she ran back down the course and wasn’t the only one spooked into thinking ‘Oh crap, how much further is it?’ by her running back towards us. For my money though, runner of the day award would go to Jacqi Stack who managed to scarf down the ‘heart attack on a plate’ that is your ‘full Irish’ before running – I found my ‘light breakfast’, even taken unconscionably early, laid rather heavily, a harsh lesson learned. 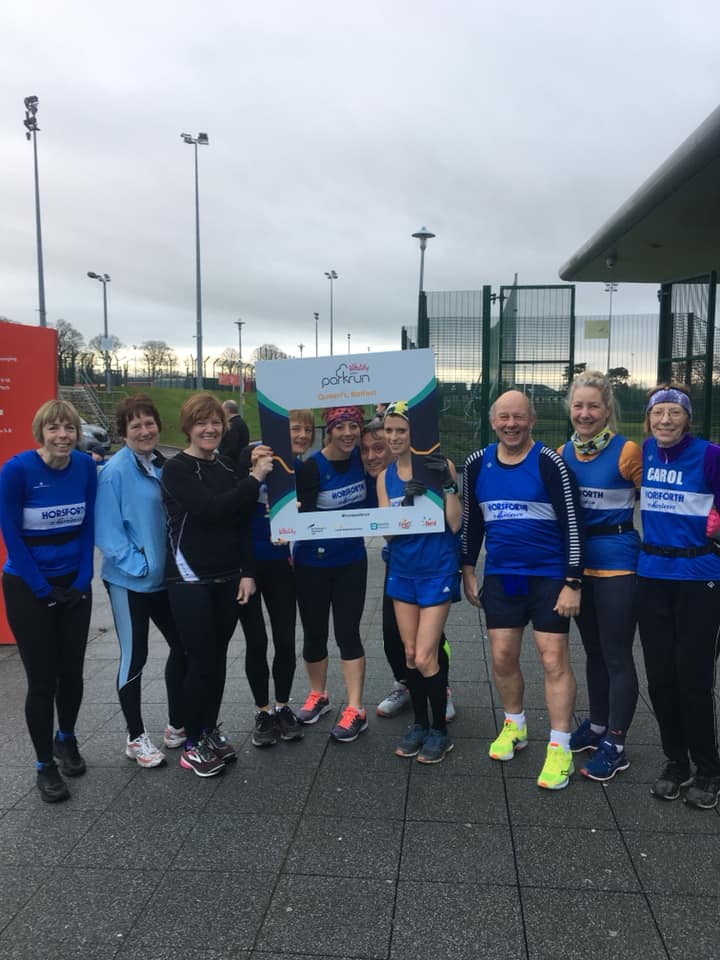 Belfast parkrun with the HH crew 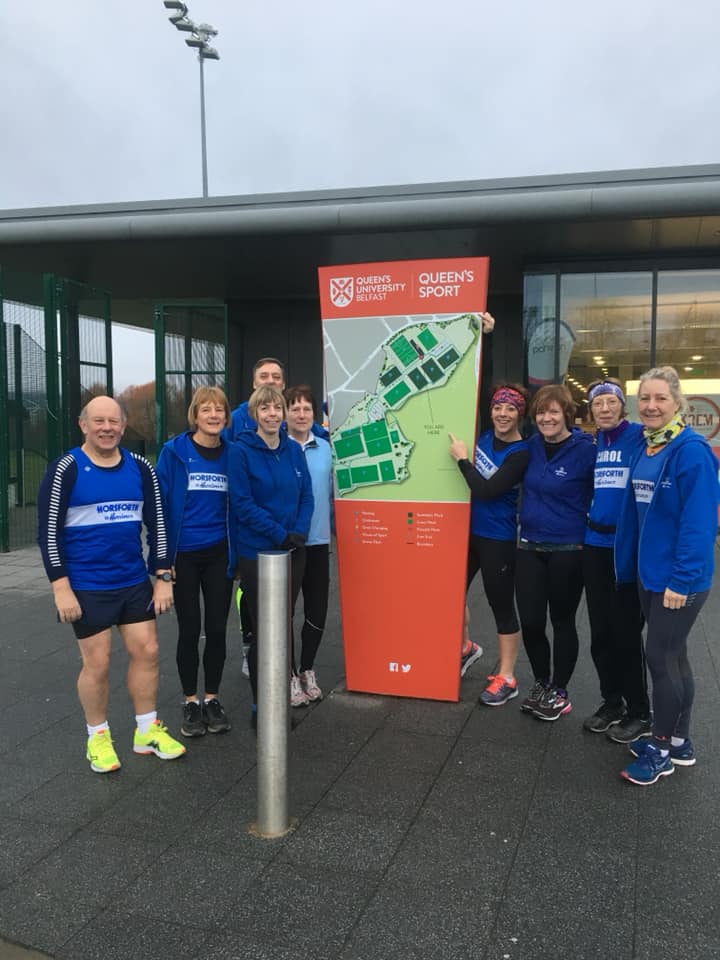 I finished the run with a very sore Achilles tendon/lower calf so was grateful to accompany Julie and the Ramsdens on the Hop On, Hop Off bus tour round Belfast for the rest of the day (we didn’t hop off once) and afterwards we took in a bit of impromptu folk music in White’s Tavern (also historic) where we’d popped in for a bit of a warmer-upper after the rather chilly trip on top of the open topped bus. (It’s likely the only way I’m going to be able to ride through a city in triumph on an open topped bus).

The following day we swapped itineraries with the majority of the rest of the party and spent an absorbing if slightly sobering day in the Titanic Quarter visiting the excellent museum and the last remaining White Star Line vessel ‘Nomadic’ now back home in a Belfast dry dock next to the museum, while most of the others froze vital parts of their anatomies off on the bus tour.

My running then took a back seat to injury and the common cold until yesterday when I hosted the Bun and Butty Club run from chez Fat Bloke. Normally we’d run from our old HQ in Horsforth Hall Park, but in January the pace is closed for upgrades and renovations, plus this year the skateboard park is, coincidentally, being replaced with a more state of the art one (or so I’m told, I’ve accepted that I’m not ‘down with the kids’ enough for me to be wildly excited at the prospect). 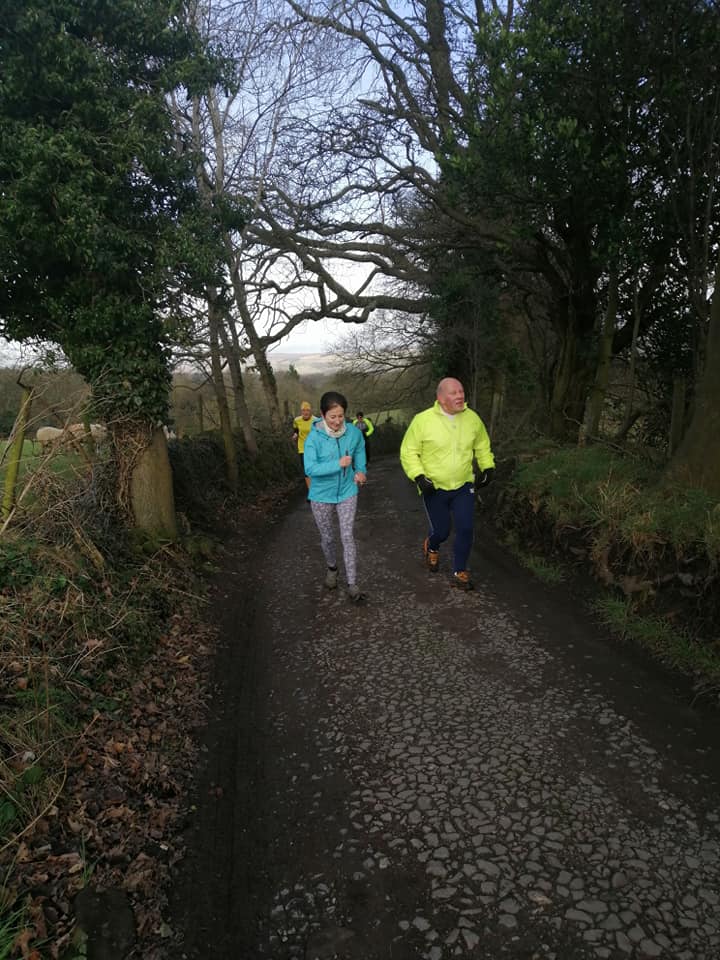 Anyway, a local, mostly off road, muddy slither and slide of a run, uncannily accurately ‘guesstimated’ at five miles, was the prelude to much conspicuous consumption at ours and next week we’ll be off to Meanwood to invade the café there. The ‘tour’ continues until mid-February when normal service resumes, but as with the parkrun I do enjoy a bit of tourism, another chance to explore a different locale.

Who knows though, I might up my parkrun average eventually via tourism. I rather gather there are potential trips to Scotland and Italy in the early stages of planning…