I’m back from a couple of weeks sweltering in Rome and the Umbrian hills, where, and I kid you not, I was up early and out running a couple of times during the week. The clues about the nature of these runs are ‘sweltering’ – even before 8.00 am – and ‘hills’, of which there were lots. Very up. Very down. It wasn’t easy, but it was fun – especially once you stopped – and I did feel supremely self-righteous for the rest of the days concerned. Plus it enabled me to keep up my prodigious pasta/beer/wine intake (oddly, very little pizza – go figure. Actually, it pretty much has).

No sooner were we back in Blighty than I was getting up even earlier to run to Morocco. Well not quite, but I was there to see fellow Harrier Ian Chappell off on his marathon run from the highest point in Yorkshire (Whernside) to the highest point in Morocco (Mount Toukbal – all 13,671 feet of it). You can read Ian’s story and follow his progress on Y2M.org.uk and if you can spare a quid or two for the charities he’s raising money for, so much the better.

But back to beginning, literally. The weather that had seemingly and pleasingly followed me back from Italy hadn’t got the memo as we arrived at Ribblehead and Whernside was invisible, swathed in murk. Undeterred, we set off and romped up the thing in a little over an hour, which probably accounted for why my legs felt so heavy on the way back down as we picked up speed. We retraced our steps at 10.00 am, the ‘official’ start time and Ian, Garth De Roux, Keith Park, Ian and Keith’s Scouting friend (and Airecentre Pacer) Gavin and myself set off on the run, waved off by a small group of Scouting chums of Ian’s, including the District Commissioner who had been cooking sausage sandwiches on the summit as a bribe for getting his daughter up there. She sounds like a girl after my own heart.

We proceeded steadily at first – having to quit after 500 yards with a sprained ankle, or worse, wouldn’t have looked good for Ian, especially as one of the guys was filming us from a drone – that, or a swarm of angry bees pursued us off the summit  – and as we did the sun burnt off the clouds giving us miraculous views of the valley below. Marvellous, and worth the effort to get up there.

Layers were peeled off and by the time we all finished, we were all a bit sunburnt as the weather returned to ‘scorchio!’ As we descended we were meeting runners doing the Pennine Barrier Ultra coming the other way and halfway down, and proving the theory that you are never that far away from a Horsforth Harrier, bumped into a presumably slightly non-plussed Kristian Henry in his Horsforth vest who must not have been expecting to see a small group of his club mates jogging downhill towards him. (Well done to Kristian though, the course looked brutal. And if you so chose to, you could do it twice!)

As we approached Ribblehead I was off the back of the group, as you might have expected (I blame Keith for putting the pedal down every time he went to the front) but I was bailing out there, while the others all ran on to Horton in Ribblesdale and Garth accompanied Ian all the way to Settle. Ian then crossed the border into Lancashire heading towards Burnley where the scouts were putting him up for the night. Looking at my watch it seemed hardly credible, but although we ran the latter stages of the descent, it had only taken us five minutes shorter to get down Whernside than it did to get up! No wonder my legs felt a bit heavy. Ian continues his run to Morocco as you read this.

Coming back up to date, this week we ran the second of this year’s Discovery Runs, from the top of Otley Chevin. Again, and probably mercifully, the sun had taken the evening off and although, once running, it was still warm, we weren’t running in temperatures more usually found on the Marathon Des Sables. There were ten mile and six mile options. The ten milers all came back safely although seemingly only on nodding terms with the route in places. The sheer numbers meant that the six milers split into three groups ably lead by Bev Elliot, Helen Fagg, and Keith Park. Helen and I consulted the map before we set off and decided that a little improvisation following the initial stages – like jazz – would be a good idea. It was.

Hearteningly for me, there were a couple of runners who had summoned up the courage to join the Discovery run who have more recently been running with the ABG. It’s always brave to do something that’s unfamiliar, or may take you out of your comfort zone, but it’s also true that doing this will make you a better runner. Without wishing to step on Hilary’s toes, it seems to me that there are plenty of others in the ABG who would breeze through one of these runs, although a little longer than they are used to doing, after several weeks of doing the ABG. The next – and last for this year – Discovery Run is from The Red Lion at Shadwell (subject to permissions being granted – check out the HH Facebook pages for developments) on July 18th.

Due to the disappointingly low numbers stopping for a pint after the run on these events, (although better numbers in attendance at Otley), I’m trying to make the finish of this run actually in the bar of the Red Lion. Not the start of it though as it might never get going….. 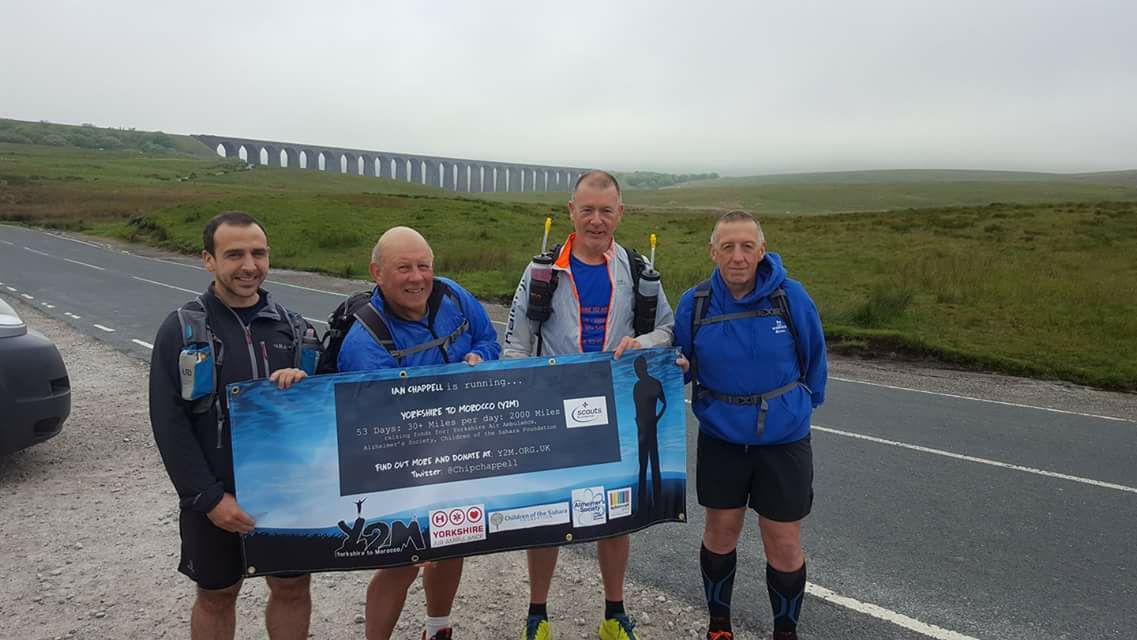 Left to right, Garth De Roux, The Fat Bloke, Ian Chappell and Keith Park pose with Ian’s publicity banner in front of the Ribblehead Viaduct with Whernside towering majestically in the back…..oh, hang on……