Following on from the previous blog, (so you’ll probably have to (re)read it to get a glimmer of what I’m writing about) I thought I might enlarge on the more obscure and arcane origins of one of the club’s oldest established traditions, possibly the most mythological subject of them all.

Tuesday evening’s ‘Gordon’s Steady Six’ was for many years where most runners at the club, me included, spent their training nights, way before we had the ABG and the multiple choice/route/distance/level groups now available. Well, until Gordon confessed that he could no longer keep up with his group – a similar realisation which had dawned on me considerably earlier. 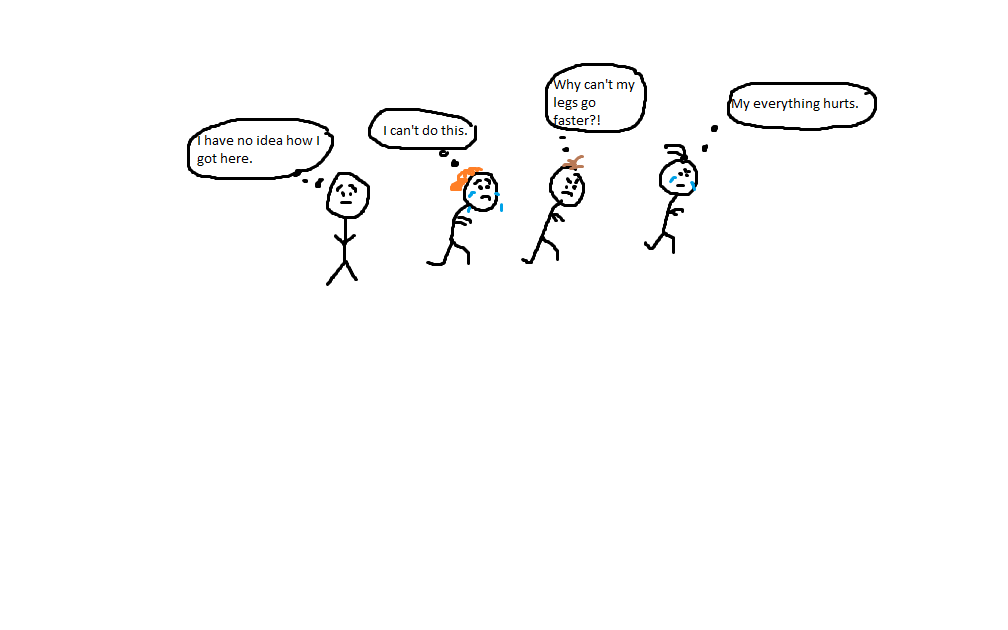 Just another night out with Gordon’s ‘Steady Six’ Group. Missing are the most frequent questions: ‘Are you really sure we are still in Horsforth?’ and/or ‘Where the hell is this?’

At the end of the run, usually having seen parts of the locale we hadn’t known existed and/or never wanted to see again, while coughing and sweating and gasping back at the club, someone would usually ask ‘That was never just six miles, how far did we run?’ Gordon would ponder the subject and then laconically state ‘I think that was a good four miles’. In the pre digital/Garmin age, more than one person would believe him, despite the ‘steady six’ feeling like and indeed ending up nearer a frantic eight.

And as time went by I noticed, amongst others, that no matter how far and how hard we ran, Gordon would always suggest we’d done about four miles. Eventually we pressed Gordon on why he always said it was a ‘good four miles’.

It turned out that, long ago, one of our better runners (we did have an ‘elite’ group even way back then and he was particularly good, no denying that) had, without ever having run with Gordon’s Group, decided, and announced to Gordon in fact, that the group was a bunch of 10-12 minute mile (or worse) plodders – he could be forgiven a little I suppose by seeing the likes of me in the group – the inference being that we were somehow ‘tossing it off’ in the group and thus weren’t ‘proper runners’ and not fit to lace his trainers. Mathematics did the rest. If we were out for an hour or so, with stops to regroup then the most we could hope to achieve was about four miles. There was no point in arguing that he was plain wrong as he had decided and publically pronounced on the subject and nothing would change his mind. Gordon quietly, and with an ironic grin, merely told his group at the end of their runs that although called the ‘steady six’, we’d probably managed just the four miles, as determined by our elite runners.

However, karma is a wonderful thing. It transpired that said quick runner got injured, as most of us do, and couldn’t, while recovering, run with the fast lads of the club. So he deigned to grace the ‘steady sixers’ with his presence for an evening. It was a damascene moment as, I think it’s fair to say, he came away with a much revised opinion of the group. First, we were obviously running a good deal further than his ‘back of a fag packet’ maths had determined. Second, and more importantly, he realised that everyone in the group was trying their socks off, maximum effort all the time. While I don’t think he disparaged the group’s efforts ever again (I think we ran him into the ground that evening!), Gordon continued to cheerfully state that the Tuesday evening runs amounted to a ‘good four miles’. Maybe just to keep the group on its toes!

The morals current runners can learn from this tale (there should always be a moral!) are: